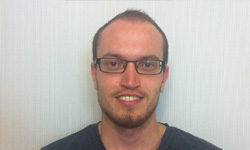 Rien Quirynen was born in 1989 in Westmalle, Belgium. He studied Computer Science - Electrical Engineering during his Bachelor and completed his Master in Mathematical Engineering, both at the KU Leuven University in Belgium. During his Master studies, he gained experience in engineering research by doing a 2-month internship at LMS, Siemens in 2011 and by taking a summer job at IPCOS in 2012. For his Master project, he worked on the "Automatic code generation of Implicit Runge-Kutta integrators with continuous output for fast embedded optimization" under supervision of Prof. Diehl at KU Leuven. Since October 2012, he is pursuing his PhD at KU Leuven supported by a 4-year PhD scholarship from the Research Foundation - Flanders (FWO). As part of the YouReCa - Junior Mobility Programme, he has been a guest researcher at the University of Geneva (4 months) and at the Shanghai Jiao Tong University (3 months) during the year 2013-2014. Since May 2014, he has been affiliated with both KU Leuven and the University of Freiburg and he will therefore finish his project with a joint PhD between both universities.